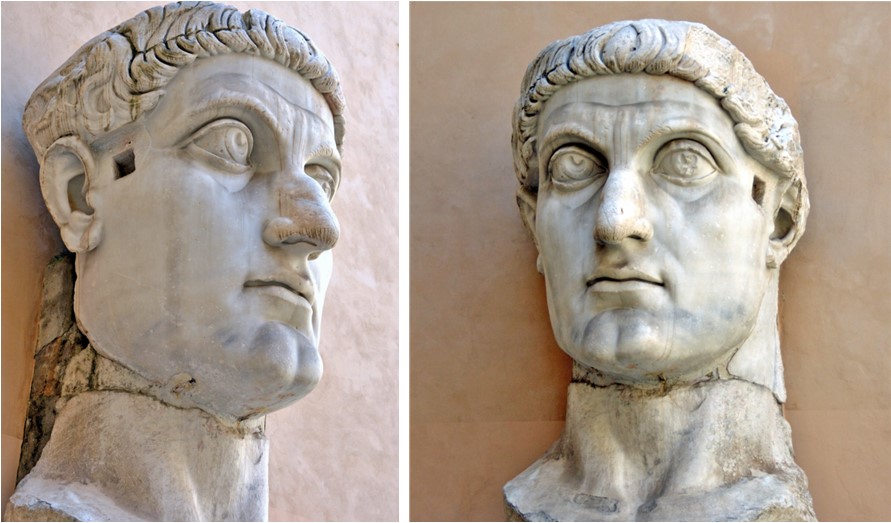 I am always fascinated by unexpected links or similarities between different places or time frames. Quite often, as I am searching through my photos when preparing a lecture, I come across such examples. Many are photos of statues which are not complete : they have lost their head or body with the passage of time. But sometimes, there are other explanations…

These statues, on show in the museum at Leptis Magna in Libya, date from the Roman period. They are “generic” statues, waiting for a head. Romans used to decorate their public spaces with effigies of the emperors and their families. Obviously, these had to be changed when a new emperor acceeded to the throne. Having these statues in reserve, made it possible to produce new ones fairly quickly and cheaply, particularly when reigns were short-lived!

“Generic” statues still exist: these are a long way from Libya and the Roman period, since these photos were taken in 2016 in Mandalay in Myanmar. The pavements of a whole street are covered with these Buddha statues. They are all depicted in the same position , that of “calling the earth to witness”, but their faces are just shapeless lumps of stone. These statues are bought by devotees who wish to “make merit” for their future life, and most of them will be donated to a temple. When someone orders a statue, they choose the style of the face which is then copied from another one, as can be seen in the photo on the right.

Another location: the Danang Museum of Cham sculpture in Vietnam. The two photos shown here were taken in 2005 and 2014 respectively. As is fairly obvious, the head is missing in the second picture. This is because there was a massive makeover of the museum in 2013 and it was noticed that the head did not really belong with the body, so it was removed. The result is definitely an improvement! I do not know what has happened to the unwanted head!

The story about the statue in the Musée Guimet in Paris is almost the opposite of the previous one. For quite a few years, the statue you see was headless (I do not have a photo of it but you can see it on this site : khmer Deity ninth century found his head (angkorvat.net). In 2006, John Dean, former US ambassador, donated the head to the Museum. He had received it in recognition of the support he had given to the conservation of artefacts during his postings in Vietnam and Cambodia. Amazingly, is was found to match the body which had been on show since 1938. It dates from the 9th century, and was found in the Bakong temple. It is thought to represent one of Shiva’s wives.

This collection of heads is also in a Parisian museum, the Musée de Cluny, which specializes in medieval artefacts. These heads belonged to a collection of statues on the façade of Notre Dame. They represented the kings of Judea as mentioned in the Ancient Testament. During the French Revolution, revolutionaries mistakenly thought they were French kings and, in order to show their hatred of monarchy, pulled down the statues and decapitated them. The heads were found in the 9th district of Paris during some building work in 1977 and were put on show in the museum. The statues present nowadays on the façade of Notre-Dame are copies which were part of the restoration programme of the cathedral initiated by Viollet-le Duc in the 19th century.

If you know of other examples of mismatched heads and bodies of statues, or if you have any information on any of the ones mentiond here, feel free to leave a comment.

previousA Quiz on Roman sites
nextVideo on the Barong Dance