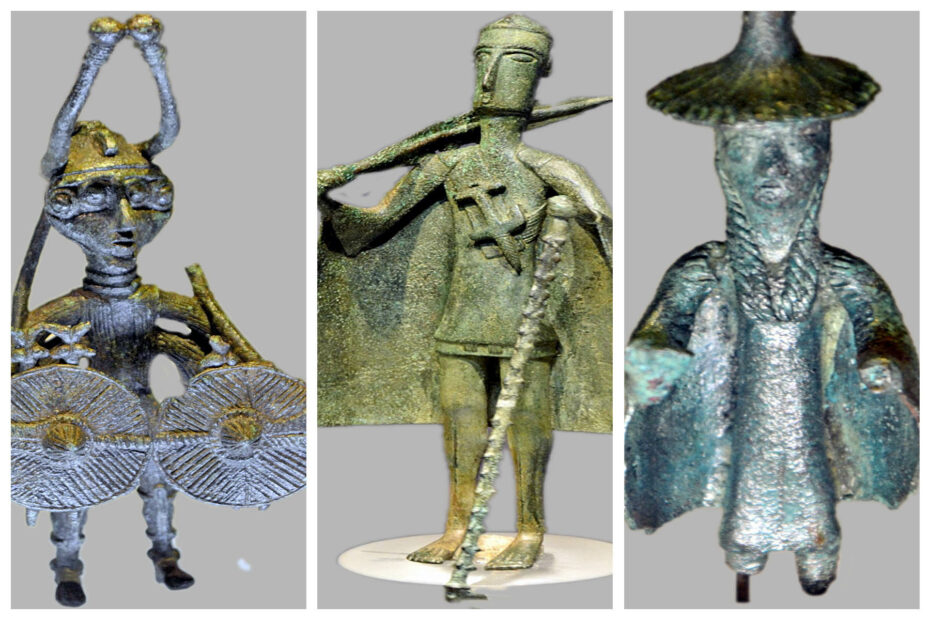 The nuragic civilization flourished in Sardinia over a long period stretching approximately from 1800 BC to the Roman conquest of the island (238 BC). It seems to correspond to a time when there were external threats, as its name is derived from nuraghe, defensive buildings made up of mortarless stone blocks, that appear to have fulfilled a religious function as well. 7 000 nuraghe have been discovered so far on the island.

Click on an image to enlarge it. To return to the article, use the back arrow in the top left-hand corner. If you use the x symbol, you will close the whole article.

A large number of small bronze statuettes, dated between 1200 and 700 BC are now exhibited inthe Archaeological Museum in Cagliari. They are particularly interesting as they offer a glimpse into the nuragic society.

Several of these small statues (most of them are less than 20cm tall) hold a wooden stick which seems to be a symbol of authority, so they have been interpreted as tribe chieftains.

Some figures (men and women) wear special outfits, such as large hats and it is thought that they portray priests or priestesses, although what their religion was is not known. Praying figures, with arms half outstretched and devotees carrying offerings (flat bread, food, drinks?) are also represented.

The two examples below, seem to be out of proportion. These could be interpreted as women with children or women holding a son killed on the battlefield. It looks as ifthe woman in the left-hand picture is breast-feeding, whereas the one on the right is quite different.

Many models of boats have also been found. Strangely enough, their prow is usually decorated with a bovine or a stag’s head. Similar objetcts have been found on the continent, among Etruscans in particular, which means that maritime contacts must have been frequent.