A marriage made in Heaven? 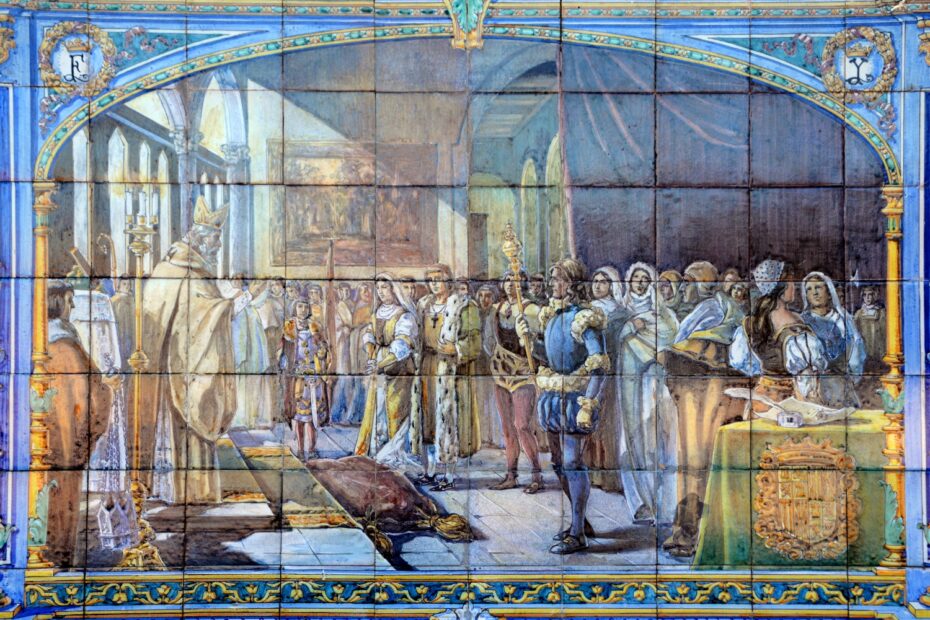 Last October, I visited Plaza de España in Seville, and this gave me an opportunity to reexamine some episodes of Spanish history, as the whole plaza is lined with depictions of historical events in azulejos.

One of the scenes which I found particularly interesting was the wedding of Isabel of Castile and Ferdinand of Aragon. This ceremony is often seen as the cornerstone of Spanish history, but a look at when and how it took place reveals that it was a semi-clandestine affair which was not on a par with the revelries usually associated with royal weddings.

The wedding took place in Valladolid in 1469. Attendance was limited, and several shortcuts cast some doubt as to the legality of the proceedings. Both spouses were quite young; Isabel was 18 and Ferdinand was 17. Neither was occupying the throne of their respective countries. Spain did not exist at that time: the Iberian peninsula had gone through several centuries of wars to reconquer the territories that were under the domination of the Muslim state of Al-Andalus. Out of this “Reconquista”, three kingdoms had emerged, allied in their struggle against the invaders, but also focussed on their own interests, which made them rivals: Portugal (independent since 1139), Castile and Aragon.

Isabel is the half-sister of the current king, Henry IV of Castile, older than her by 20 years. He is a fairly weak character and some things are unclear about him. His first marriage was dissolved for non-consummation and he has married again: a daughter, Joan, has been born of this union, but many doubt that she is legitimate, as the king is rumoured to be impotent or homosexual. She is usually known as “La Beltraneja” as she is thought to be the daughter of a certain Bertran…, the Queen’s favourite. . Henri IV is said to have made a will in favour of Isabel, which makes her a potential good catch!

Ferdinand is the son of the curent king of Aragon, John II of Aragon, but was born from a second marriage, so it is his elder brother, Charles of Viane, born of the first marriage, who is the heir presumptive. Various disputes arise between Charles and his father and Charles dies in suspicious circumstances in 1461, possibly poisoned by Ferdinand’s mother, which precipitates a civil war . In 1468, Ferdinand becomes of age and is crowned King of Sicily, a possession of Aragon at the time. In 1469, his father is 60 years old, so Ferdinand is likely to succeed him fairly soon, but nothing is certain in such a volatile climate.

The marriage was not publicised ahead of the ceremony for good reasons! The will written in favour of Isabel by Henry IV stipulated that she could not marry without his consent and Ferdinand of Aragon was not his choice. Isabel’s one-sided choice was tantamount to treason. Moreover, the spouses were closely related: as second cousins, they neeeded a papal dispensation to make their marriage legitimate in the eyes of the Church. Quite fortuitously, a papal dispensation, written by Pius II, by then dead for five years, where the name of the bridegroom had been left blank, was produced in time… Who the author of this document may have been has never been proved! The real long-awaited dispensation will be given by Sixtus II. Elected in 1471, he granted the couple the dispensation they needed, but this did not mean that all obstacles had been removed.

Henri IV, Isabel’s father, died in December 1474. The Castilian nobles could not agree on who was to succeed him : his half-sister or his daughter, who was probably illegitimate? La Beltraneja had been very unlucky so far: she had been engaged twice already, but, each time, her future husband had died before the wedding took place. Isabel seized her opportunity. As her father’s funereal service was coming to its conclusion, she threw off her black cape, revealing a pure white outfit, walked outside and proclaimed herself queen in front of the astounded guests.

This was the start of another civil war : the war of Castilian succession. The king of Portugal married la Beltraneja and took up arms to defend her inheritance. Fighting continued for four years, without either side gaining a clear advantage, until the battle of Toro, near Zamora,. in 1476. This gave the victory to Ferdinand’s army (although recent studies show that the issue was not so clear-cut) and confirmed Isabel as queen of Castile. La Beltraneja suffered a further humiliation: her marriage was dissolved by Sixtus II on grounds of consanguinity and she finished her days in a convent.

The two spouses were both unusual individuals, extremely ambitious and politically astute: how they were going to function as a couple was obviously not straightforward, but they seem to have achieved a certain balance. In 1469, they signed a pre-nuptial agreement confirming that they would share power. Their motto was ” tanto monto, monta tanto”, Isabel con Ferdinand , which roughly means Isabel or Ferdinand are the same. The first part of this sentence is said to have originated with Alexander the Great when he cut the Gordian knot. The emblems of the two spouses, a yoke for Aragon, a bunch of arrows for Castile, can be seen represented in the Convent of San Juan de los Reyes, built to celebrate the victory of Toro.

In January 1475, Isabel and Ferdinand signed the Concord of Segovia : this was to define the respective powers of each sovereign in both kingdoms. It seems likely that Ferdinand expected to reign as he wished in Castile, since Isabel was only a woman, after all! But it was not in Isabel’s temperament to accept such a situation and she kept the upper hand in the affairs of Castile. The division of powers was applied on the same principles, but the other way round, when Ferdinand became king of Aragon on the death of his father in 1479.

The cornerstone of Spanish history?

For reasons of convenience, most people start referring to “Spain” from that date. One can understand it, as enumerating all the titles of the royal couple was a bit of a mouthful. Not only were they kings of Castile and Aragon, but also of Leon, Majorca, Valencia, Sardinia, Sicily and Naples! In reality, each kingdom kept its institutions and privileges for several centuries. A centralized government will be put in place by a Frenchman, Philip V of Bourbon, who will harmonise the laws of Castile and Aragon between 1705 and 1716 (Decrees of Nueva Planta) after winning the wars of Spanish succession. He obviously took after his great-grandfather Louis XIV!

1492 is often seen as the high point of their reign. First of all the last episode of the Reconquista is played out with the fall of Granada, the last Muslim state on Iberian soil. It is also the year when Christopher Columbus discovers America, thinking he has found the Indies, which will be the source of incredible wealth for Spain. Tragically, it is also the year when Isabel signs the Alhambra decree, which resulted in thousands of Jews being sent into exile.

Their efforts to fight the “infidels”will be rewarded by the Pope, who grants them the title of “Catholic Kings” in 1495. Little did anyone know then that the marriage of their youngest child, Catherine, to Henry VIII, would be the origin of the creation of the Anglican Church…