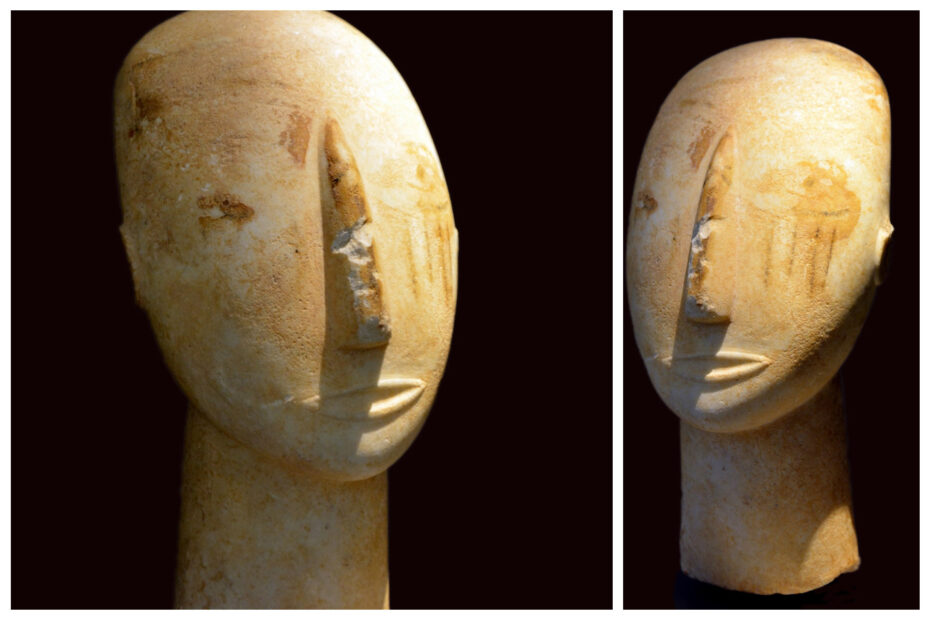 Cycladic art is amazing in its modernity : the shapes are simple and elegant, decoration is kept to a minimum, and there are some surprising, more or less abstract, statuettes whose significance or function is still not totally understood. The period concerned is the Bronze Age (3200-2300 BC)in the Cycladic islands of Greece, but this cultural unity does not seem to have meant the existence of a state as such.

It is quite similar to what is found on the continent during the same period (bird beak shape), but, as the local clay was hard to work with, marble was also used.

Click on the image to enlarge it. To return to the article, click on the “back” arrow in the top left-hand corner, not on the x, or you will close the whole article.

The name has been given to these objects because of their shape, but, considering they were made of terracotta or stone, they cannot have been used for cooking! The incised decorations often show symbols of fertility (pubic triangles) and geometric figures. Some also depict large rowing boats.

Most of these have been found in tombs. At certain times they have been quite realistic, during other periods they have been so abstract as to be almost unrecognizable (the most abstract ones date from Early Cycladic I and Early C ycladic III- for dates, see below). Generally they are quite small (under 50 cm) but one or two much bigger ones have been found, although no one knows whether they served a different purpose. Were they idols? The position of their feet seems to show that they could not stand, so it is likely that they would be displayed lying down, possibly to signify death?

Many questions are still unanswered. The mystery deepened further when, in 2006, Sir Colin Renfrew, a British archaelogist, discovered a heap of deliberately smashed statuetteson the small island of Keros. When he tried to put the pieces together, it became obvious that these were only fragments and there were no complete figures. This island may have served as pilgrimage site where people brought broken statuettes, but no one to date has been able to find an explanation.

See also in lectures: Greece before Greece: The Cyclades and Crete

previousThe face that launched a thousand ships
nextLemons for a Nymph and commercial genius: Amalfi