The face that launched a thousand ships 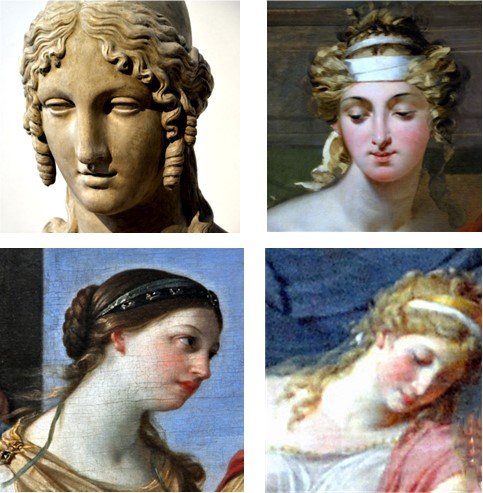 You may wonder if the dessert “Pear Belle Hélène” has any connection with Helen of Troy, or rather Helen of Sparta. The link is rather tenuous: the recipe was created at the time when the comic opera “La Belle Hélène” , by Offenbach, was first performed in 1864.The dessert certainly does not explain how the Trojan war started. To understand the part played by Helen, we need to remember that she, the most beautiful woman on earth, was given to Paris, as a reward by Aphrodite. (It all started with an apple!)

A divine ancestor and many siblings

Helen was the daughter of Leda, who was married to Tyndaris, king of Sparta. But Zeus fell in love with Leda, and, in order to seduce her, changed himself into a swan. Helen was born from this union.

Helen’s beauty is a curse!

Helen became extraordinarily beautiful. As a child or a teenager, she was noticed by Theseus (better-known for killing the Minotaur), who decided to kidnap her. He took her to Attica, but her brothers Castor and Pollux (also known as the Dioscuri) rescued her and brought her back to Sparta. A large mosaic (8m x 2m) in Pella, ex-capital of the Macedonian kingdom and birthplace of Alexander the Great depicts the moment when Theseus abducts her. Unfortunately, it is badly damaged and is very difficult to photograph!

On the left, Theseus has grabbed Helen by the waist. She has turned towards her friend, trying to reach out to her (one can see her head, her two arms and her legs). Her friend is also trying to reach her in vain.

A coachman is waiting to take Theseus and Helen away. His name, Phorbas is incribed next to his head. This has helped identify the episode (abductions of women are numerous in Greek mythology!)

This stela is in the museum at Sparta. It shows Helen with a “basket-like crown”, according to the description, flanked by her two brothers. The sculpture is also described as dating from the 1st century BC, although it looks older. The worship of Helen was something specific to Sparta.

Helen’s beauty caused more problems when she became of marriageable age, as there were many candidates wanting to become her husband and King of Sparta. Finally, Menelaus, brother of Agamemnon, king of Mycenae, was the winner. However, Ulysses, crafty as ever, sensing that there might be trouble brewing, suggested that all suitors should swear to help Menelaus if anything threatened Helen in the future. This was done with great solemnity.

Paris arrives in Sparta to claim his prize

Paris arrives in Sparta : this is where the fateful events leading to the Trojan war will take place. Helen is the most beautiful woman in the world and as such has been promised to Paris by Aphrodite and he intends to claim his prize. Taking advantage of Menelaus ‘s absence, Paris takes Helen to Troy.

Is it perfect love?

These three Etruscan representations from Volterra show Helen resisting as she is taken to Paris’s ship.

The start of a terrible war

The humiliation was too much for Menelaus. Remembering the promise of all suitors to come to his help if needed, he and his brother Agamemnon, demanded that they and their armies regroup to go and attack Troy.

What happened to Helen?

Once again, there are several versions. One of the most surprising is that of a double having been substituted for Helen, while the real one spent the duration of the war in Egypt.

In other versions, she did go to Troy and may have realised what was hidden in the wooden horse, but it is not possible to know whether she realised or regretted what had happened. The painting below, “Helen on the ramparts of Troy” shows her as a melancholy figure.

After the war, she would have returned to Sparta et would have been reunited with Menelaus. It is sometimes said that he was ready to kill her, but, when he saw her again, he was overpowered by her beauty and forgave her. In the two examples below, Helen’s hand gesture has been interpreted as begging for forgiveness.

What a complicated story! The two panels below are on show in the Museum in Sparta. On one side, a man is seen putting his arm round a woman’s shoulder, on the other a woman is being threatened by a man holding a sword. It has been suggested that one side represents Helen and Paris and the other Helen and Menelaus.

2 thoughts on “The face that launched a thousand ships”