It all started with an apple! 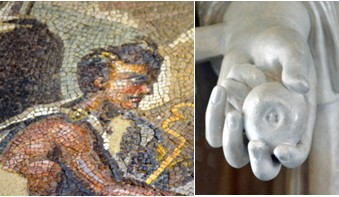 I am not talking about Adam and Eve, but about the event which started the Trojan war. Going round museums, I have been amazed at how this episode has been popular throughout the ages and has been depicted in many ways and styles.

The story starts at the wedding feast of Peleus and Thetis on Mount Olympus. Unfortunately, the goddess of discord, Eris, has not been invited. Furious, she gatecrashes the party, and brings a rather peculiar present: a golden apple on which the following words are inscribed “To the fairest of them all”. She throws the golden apple amongst the guests, and, straightaway, three goddesses, Hera, Aprodite and Athena claim it as their right. Zeus finds himself in an awkward position since Hera is his wife, so he asks Hermes to find someone to decide who the right claimant is. The chosen judge will be Paris: son of the king of Troy, who has already settled in a just manner a difficult dispute between gods, so should be the right arbiter.

This painting represents a scene which takes place before the judgement. It dates from the 1530s, which explains the costumes worn by the male characters! It is also interesting to note that the story has been transmitted via Latin. Hermes is now Marcurius, Aphrodite is Venus, Hera is Juno, and Athena is Pallas. Each goddess can also be identified through her attribute (s). Venus is accompanied by a small Cupid, flying over her head. Athena has a helmet and a lance, while Hera is followed by a peacock. Paris is asleep and is dreaming of the three goddesses who seem to be involved in a discusssion, probably working out their strategy?

There are several versions of the actual judgement. It is said that each goddess offered Paris some enticement : Hera promised him an empire, Athena offered him military prowess and glory, and Aphrodite told him he would win the favours of the most beautiful woman on earth.

These three vases are more or less contemporary: all three are Greek and date from the 6th century B.C

The first vase is exhibited in the Musée des Beaux-Arts in Lyon: Paris is on the right, Hermes, recognizable by his caduceus (a staff with two snakes entwined around it) is telling him who the three goddesses are and what he will have to do.

The second picture shows an ointment or perfume vase which is exhibited in the Musée des Beaux-Arts in Lille. The scene is similar to that on the previous object but, here, Paris seems to react to what Hermes has told him and shows little enthusiasm for the task. One can identify each goddess: Hera, right behind Paris, carries a sceptre and Athena, last in the queue, carries a lance.

The amphora in the third picture is in the Vatican museum. Here again, Paris seems to be unwilling to perform his duty. The clothes worn by the goddesses are all different but no attributes help identify them. There is a fifth character following the goddesses, but I have been unable to find out who it is.

This cameo dates from the 2nd century AD. Paris has made his choice and has given the golden apple to Aphrodite. Athena, helmeted, is behind her and is followed by Hera. Paris is wearing a Phrygian cap. In Greek art, this type of headgear represented “non-Greeeks” , i-e Barbarians. Roman art kept this as a symbol of “foreigness”. Later on, it was thought to represent a cap worn by slaves that had been freed and became a symbol of freedom, which is why it was used by revolutionaries during the French Revolution.

This 2nd century mosaic, shown in the Louvre, which is on a totally different scale, was found in Turkey. Paris is about to render his judgement. Watched by Hermes, who is seated further back,he is examining the three goddesses, Athena, helmeted again, Aphrodite, in white with Eros behind her, and Hera in Blue. None of them seem to be particularly interested in the proceedings. Paris is portrayed as a shepherd : when he was born, the omens were not good and it was predicted that he would be the ruin of Troy, so he had been secreted away (instead of being killed), and had become a shepherd (hence the dog at his feet) on mount Ida, far from Troy.

Click on the photos to enlarge them. To return to the article, use the back arrow.

A Syrian representation from the 2nd or 3rd century

This frieze is in the Louvre and I probably would have gone past it without realising what it depicted if my attention had not been caught by the accompanying label. It does represent the Judgement of Paris, but in a totally different way from what we have seen so far. The lintel was found in Syria and was part of a temple dedicated to the local cult. Certainly, Greek culture and mythology were in evidence all around the Mediterranean, but why it should have been used in an Eastern temple is rather puzzling. All characters are lying on the type of bed used in banquets, but there is no evidence of any drinking cups or food. From left to right you can see Paris, Hermes, Aphrodite, Athena, Hera and Zeus.

Paris is shown wearing a Phrygian cap as is traditional. He is not looking at any of the other characters and there is no depiction of the apple, unless it has disappeared?

Hermes can be recognized by his winged helmet and the caduueus held in his left hand. Whatever was held in his right hand cannot be identified.

Aphrodite has her faithful Eros in tow and is looking at her reflection in a mirror. She is fully clothed, but the skin-tight tunic reveals her charms rather than hides them!

Athena is wearing a helmet and carrying a lance, but it is broken.

Hera is not represented with a peacok, but holding two ears of corn, usually a symbol of fertilty associated with Demeter (Ceres in Rome). This may be linked to a tradtional Eastern belief in a triad of goddesses, one of whom is the goddess of fertility.

Zeus, bearded as is usual, looks very regal as he holds the world in his hand. It is interesting to note that it is represented as a globe : people have known since Antiquity that the earth was round! However this depiction of Zeus is unusual in Greek art.

A representation from Limoges circa 1500

This representation, the size of which I failed to write down when it was exhibited in the Louvre-Lens, is made of enamel, a medium for which Limoges is famous. It is not easy to interpret it. At first sight, it could be Paris’s dream (see introduction), but the golden apple has already been given to Aphrodite who turms towards her two rivals: one glares at her, while the other ignores her. For some reason, two of them wear a cross round their neck! As for Paris, he is probably awake, but the look on his face seems to indicate that he may regret what he has just done!

A Dutch representation from the 16th century

This painting, shown in the Louvre, is dated circa 1575, and is attributed to a Flemish painter, Anthonie Blocklandt van Moonfort. It is likely to be a model for an engraving. In the centre, Paris is giving the apple to Aphrodite, accompanied by Eros and crowned by a winged Victory. The two other goddesses, recognizable by their attributes, a peacock and weapons, seem furious about their defeat! Hermes, carrying his caduceus and with wings on his feet, is sitting under a tree. His headgear, however is rather original! I cannot identify the character sitting in the bottom left corner. it may be the personification of a river as suggested by the the water running from a large vase, a symbol often used in Roman art.

An English watch from the 17th century

This watch was made in London by two French enamellers, the Brothers Huaud, probably just before 1700. As they were Huguenots, it was better for them to take refuge in a Protestant country, particularly after the Edict of Nantes, which allowed Protestants to reside in France, had been revoked by Louis XIV in 1685. The scene takes place before the actual judgement. Hermes, complete with caduceus, shows the apple to Paris and explains what he is supposed to do. Aphrodite is in front of the other goddesse, naked except for a strategically placed fabric that Eros is trying ro remove. Athena and Hera (with helmet and peacock) are fully dressed. Is this unfair competition? The watch is exhibited in the Louvre Museum in the Objets d’Art section.

A tapestry from the Gobelins

This tapestry is contemporary with the watch above and represents a painting from Raphaël which has since disappeared. Paris, under the watchful eye of Hermes, gives the apple to Aphrodite (in red, with Eros next to her). Hera is not happy and starts remonstrating with Paris, while Athena decides to get her clothes on again. Many other mythological characters are present, Zeus with his lightning bolt, Helios in his chariot and, probably, in the bottom right-hand corner, the personification of a river. The Manufacture des Gobelins, in Paris, was renowned for the quality of its tapestries and was sponsored by the royal family. There is a museum on the site, where this tapestry is exhibited.

Click on the image below to enlarge it. To return to the article, click on the back arrow , not on X, which will close everything!

A Chinese representation from the 18th century

This plate, dated circa 1750, was made in China and can be seen in the Musée de la Compagnie des Indes in Lorient . At that time, European porcelain was still in its infancy, so porcelain items were ordered from China, where artisans relied on the instructions given by the clients to know what to draw, which sometimes led to slightly surprising results. However, in this particular example, the iconography is well respected, even if the rendering of the goddesses does not reflect European taste. Paris is shown with his dog, Hera on the left holds a peacock, Athena, on the right, draped in a sort of orange toga is helmeted and holds a lance. Aphrodite, in the centre, is receiving the apple. Eros, sitting on the ground, is tugging at the fabric which offers Aphrodite a semblance of modesty!

See also in lectures : Greece before Greece : Mycenae and the Trojan war