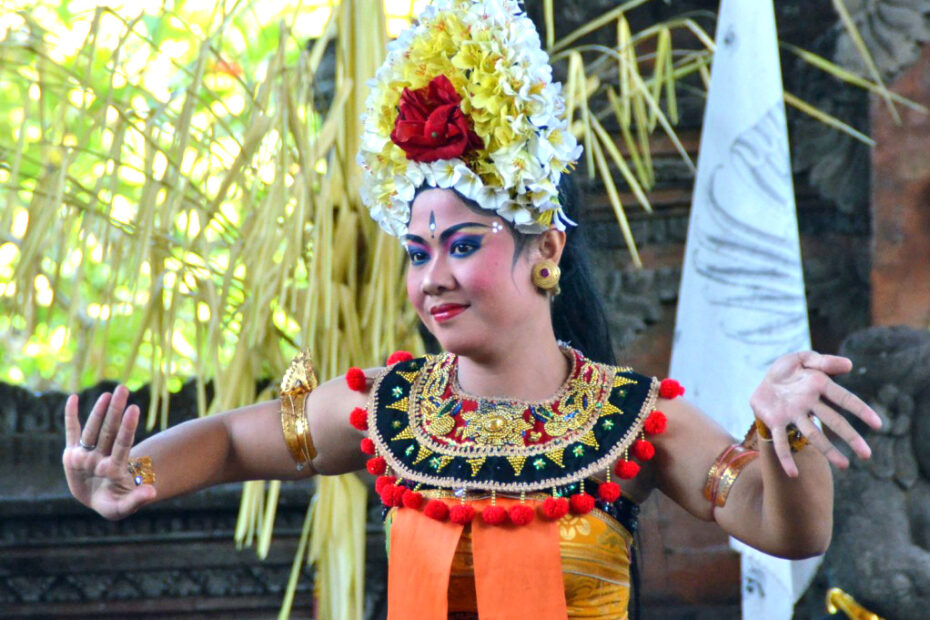 What does “Balinese dancing” conjure up in your mind’s eye? Probably beautiful girls, rich costumes, graceful hand movements and lovely background music. True! But there is a lot more to it as we were to discover when we attended a “Barong dance” on our way to join the Aegean Odyssey on the recent cruise from Bali to Bangkok.

The performance started with a blessing from a pemangku, a local priest, who made offerings to the gods as this was no ordinary “tourist” dance. In fact, most dancing in Bali is imbued with a religious dimension as the Balinese world is inhabited by gods and spirits. Bali is traditionally Hindu, but Hinduism in Bali has acquired a special flavour which exists nowhere else. On previous days we had visited temples and witnessed some of the religious ceremonies but this was a totally different environment.

After the blessing, it was time for the many performers to come onto the stage. Various characters, servants, animals and clowns appeared in turn. The plot of this traditional tale was not necessarily easy to follow in its details (a summary sheet in English was provided to all spectators) but the range of emotions portrayed was amazing and the abrupt change from drama to comedy, not to say farce, was quite an experience for Western spectators, unused to this mixture of genres in such a short time.

All this, accompanied by the traditional orchestra, the gamelan, was an introduction to the real meaning of this dance which illustrates the struggle between Good and Evil. In Balinese terms, both Good and Evil are facets of the same reality and must coexist, but Evil must be kept in check. The plot of the story is derived from ancient Javanese legends with which most foreigners are not familiar, but the lessons it contains are universal.

The Barong represents Good. A mythical animal, it takes the shape of a lion, reminiscent of those in Chinese lion dances, although no direct link between the two has been established. Its bulging eyes are meant to frighten away evil spirits but its rich costume shows that it is a positive force.

In her efforts to defeat the Barong, Rangda induces some of the dancers into a trance: this is quite frightening to watch as the dancers turn their kris against their chest to stab themselves.  But the Barong’s power is stronger and the dancers finally come to no harm. The trance is real and there have been instances when it takes a long time to bring back the dancers to a normal state of consciousness.

In the end, Rangda is defeated and is carried away, but the struggle between good and evil is only temporarily over.

Attending such a dance is one way for non-Balinese to realize what a complex world Bali is, steeped in ancient traditions but also part of the modern world. The hotel we had just left boasted all mod cons and offered a very high degree of comfort and sophistication which many places in the West would be hard pushed to emulate.  Within a few minutes we were taken back to a much older set of beliefs, still meaningful to the Balinese. We were lucky enough to glimpse a special facet of “the island of the gods”.

This article was written for Voyages to Antiquity in 2015.