Where would you find these two replicas of the Holy Sepulchre? 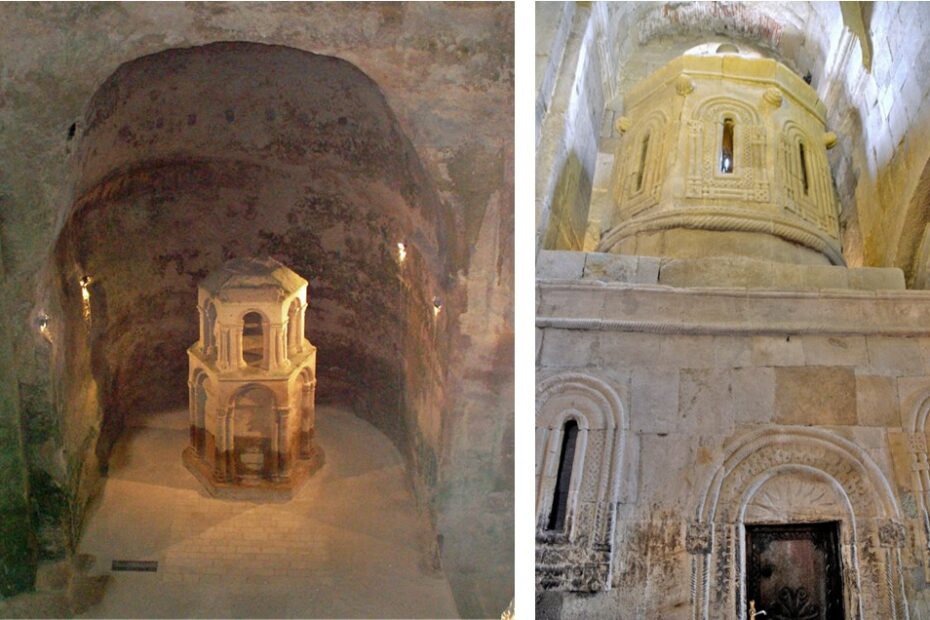 These two replicas of the Holy Sepulchre in Jerusalem are nearly 5000 km apart and were built whithin two centuries of each other.

The image on the left shows the inside of the monolithic church in Aubeterre-sur-Dronne, in the Charente (not far from where we live). The replica was built by the Viscount of Aubeterre in the 12th century, on his return from the Crusades. He did this as he had the church enlarged. He was probably inspired by the type of churches he had seen in Cappadocia.

The picture on the right was taken in Svetiskhoveli cathedral in Georgia. The original church dates back to the 4th century when the kings of Georgia converted to Christianity, but it has been rebuilt many times. The replica of the sepulchre was added in the 14th century.

The reason was that it underlined how sacred this site is. According to legend, a Georgian Jew, named Elias, was in Jerusalem at the time of the Crucifixion and bought the tunic of Christ from a Roman soldier. He brought it back to Georgia and showed it to his sister, Sidonia, who was so overcome with emotion that she died on the spot, clutching the tunic so hard than it could not be wrestled from her , so she was buried together with it.

This is why the site of Saint Sidonia’s tomb was chosen to build the first church in the 4th century. A ciborium (a freestanding canopy with 4 columns) was built in the 17th century to mark the site of her tomb.

previousVideo on the Barong Dance
nextCovid in the Afterlife